Barry Goddard – Mother spider is taking care of me 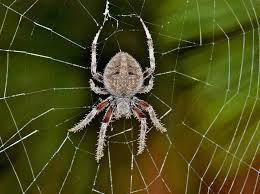 Mother Spider is taking care of me

Jung said that the earliest dream you remember can foreshadow the pattern of your whole life, or at least the first part of it. My first remembered dream is from when I was about 4, and soldiers were attacking our house from the rear. They climbed up onto the conservatory and approached my bedroom window. One of them threw a bomb at me – like a yellow grenade – and it hit me on the nose. I woke up with my nose itching.
This dream describes the assault on who I was – my security in who I was – from an early age by my parents’ needs and fantasies, and later by the boarding school system. They did a good job. I grew up very concealed from myself. I was colonised by an invading army.
I have 3 house spiders who have recently come to live with me. How they got behind the secondary glazing I do not know. This is me consciously spinning my own webs and connections, that reach far into this world and the other world, instead of being part of the unconscious webs of others, that do not connect and enchant, but entrap. As for the flies, they are my tormenting shadow elements that are transformed by being held in this otherworldly web. Mother Spider is taking care of me.
Click here to read more articles from other writers

I have discovered ‘Exercise’! There is no mention in any of the Lifestyle headings about ‘Exercise’. This should be part of 50plusonlinecafe topics. So important!

Now that we can get back to enjoying live music, is there anyone you really want to see or already have tickets to see this year? I will be seeing Eagles at Hyde Park at the end of June. One of my favourite bands that I have never seen before and am very much looking forward to seeing play live.

How was your weekend?

I was saving cats on Saturday helping out at our local Cats Protection bazaar. Then on Sunday I was painting all of the wood in sight with wood stain/preserver – table & chairs, bench, door frames. Only gets done once every couple of years but a good job to get out of the way!

You can find out more about which cookies we are using or switch them off in settings.