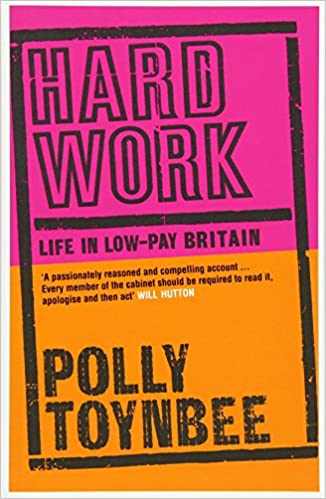 What do you remember of the books you’ve read? Some you forget almost as soon as you’ve turned the last page; it’s not that they were badly written or uninteresting (I’ve long abandoned those categories) it’s just that something in them does not stick. The vital glue is missing. And then there are others. Enemy of Rome by Leonard Cottrell, to name but one, has stuck with me for well over half a century and just goes on sticking. it’s a stuck kinda book, a veritable barnacle. Another is Hard Work: Life in Low Pay Britain by Polly Toynbee. The only reason this book has not equalled Enemy of Rome in stickiness is that it is handicapped. It didn’t exist until 2003.

It wasn’t that long after publication that I read the book and I haven’t re-read it but I sure remember it, and I make sure everyone else remembers it too. So, this review is of a book I read about fifteen years ago.

Polly Toynbee at the time of writing, used to live in a posh part of Clapham with her husband, where only serious money is allowed. The thing about the comfortably off is that they don’t recognise their own comfort. Oh, they might know it as a remote statistic but they don’t feel it. The life they lead is the normal one, unremarkable, with enough money for anything that might come their way and enough for going away too. They’re not rich, just normal, and they have a lot of neighbours who are just like them. So they’re nothing special. Just normal. Poly Toynbee was just normal – her normal – when she began writing Hard Work.

Polly’s plan was to move on to the Clapham Park Estate, Clapham in name only you understand, so she could live the life of the poor and downtrodden or maybe she was hoping to find Lambeth’s Potemkin Village. Now, just before she made the big move, leaving her husband and marble halls (we’ll forget about the vassals and serfs), she went out to a local restaurant for a provisional farewell meal with her spouse. The bill for the evening, a dinner for two, came to an unremarkable £80 (£130 in 2020 money). This, she thought, was simply normal, a typical ‘table for two’ price, very unremarkable and clearly frequently practised. What she did remark upon, however, somewhat dismayed, that this was someone’s fortnightly social security money. A single, unnecessary, casually unremarkable, very expensive but easily affordable meal for her was someone else’s survival for two weeks. My brother thought £80 was perfectly normal too, until I took him and his girlfriend to a ‘table for three’ at my normal for £27 including booze. He was amazed.

Toynbee chose the Clapham Park Estate because her research indicated that this was the worst in South London, an accolade that was later disputed. Through some contact, she got the use of a council flat for the duration of her field research. She then realised she had passed this estate many a time over the years, but it had never really registered. She had been barely aware of its existence and suddenly she was now being confronted. Although determined to live a ‘simple bare necessities’ life for the duration, she insisted on having a TV. This was a sine qua non, as Boris Johnson might have put it. She couldn’t live without it. Funny, I’ve managed without for 25 years.

So she settled in anyway, and appeared to get on with her new neighbours, and seemed slightly surprised at the generally happy atmosphere of people leading their kind of normal lives. She did describe, though, a flood she experienced caused by a plumbing team turning on a tap they shouldn’t have during some repairs despite a notice being left on the very tap by a previous team, telling them not to. With a lot of first hand experience of social housing, I find this all too believable. Her anger at the stupidity was palpable.

Now, the plan was that she was going to pose as a poor person, living on the cheaper side of town, looking for work. She trotted her ‘edited’ CV around to various private employment agencies but, she found, what really interested them was the one big question: was she legal? Assured of her legality, she was sent out on the work trail and found another world – another normal but a different one to hers and she did not like it.

She tells of several occasions where she had travelled some distance to a job interview only to be told on her arrival that it had been cancelled. Unused to such treatment, she would express her anger only to be answered by bafflement. Wasting the time of the poor is simply normal.

One of her jobs was as an assistant in a school kitchen. There she made a discovery, as she did in some of her other roles: she was surprised how hard people at the bottom worked. She was also surprised at their discipline and commitment, recognising that many workplaces would not function without this approach. And yet, people who left these positions because they got another job elsewhere, were usually praised for so doing by their fellow workers and by their managers. Leaving these jobs was seen by all as a sign of advancement. Yet, as Toynbee refreshingly and honestly points out, these jobs still need doing! (my emphasis) It is the chronic undervaluation of people at the bottom that leads, in my opinion, not only to much social misery but also to much of the poor productivity that seems to be a permanent but unresolved feature of industrial life in the UK. Treat people better and they will work better – it’s a no-brainer (for some). As my own MP stated in the House of Commons “there are no low-skilled jobs, only badly paid ones”.

Another job she took was that of a nanny. Suitably attired she would, among other things, wheel her pram bound charges in a nanny-like manner. There was a snag. Her route would take her right past the House of Commons, right past all the MP’s who not only knew her but in many cases, had been interviewed by her. Her cover would be blown, she feared. She need not have worried. Of all the MPs who walked by, including acquaintances and interviewees, not one recognised her. All they saw was a nanny. Her secret remained safe.

What do we see when we look at another? There is story told that at the height of the Napoleonic wars, the Duke of Wellington went to a highly secret conference with Lord Somebody-or-other. The two man conference (a table for two?) was held in a long hall lined with footmen. Worried for obvious reasons, the Duke suggested to the Lord that they be alone. The Lord looked around and came back with a slightly puzzled “But we are”.

Do we ever learn the lessons when we don’t have to? In pre-war Hong Kong, in the late 1930s and early 1940s, British military officers used to frequent a popular hairdressing establishment run by a Japanese barber. It was a relaxed place and the officers chatted freely, discreetly attended by the staff. It was only following the fall of the city on Christmas Day 1941 when the same Japanese barber re-emerged in the uniform of a naval officer, that the penny dropped.

Polly Toynbee penetrates the sheer scale of social injustice that bedevils this country, a country, sadly, not alone in this regard in a world of multi-level normality. Her book is, in some ways, complemented by Hired: Six Months Undercover in Low Wage Britain by James Bloodworth. But Hired was written in 2018, long after austere austerity had simply become an acceptable price to protect the status quo – acceptable to those who value the status quo, that is. Toynbee’s book was written long before the fall, supposedly in the good times – except when you scratch the shiny surface, you realise the good times didn’t roll to those living in the wrong part of Clapham.
A must read